Kids mean everything to the Mocka family, from a newborn baby to a playful five year old, the Mocka family hold kids close to their hearts. Having kids themselves, they couldn’t begin to imagine if one of their own was to get sick or be injured. So when they heard about Jasmin Green, a young girl who suffers from a rare condition of Dravet’s Syndrome, they jumped at the chance to help support her cause.

Jasmin Green was born a happy and healthy baby but only experienced 12 weeks of healthy living until her first seizure came, starting a series of seizures that haunted her childhood. After years of medical trials Jasmin was diagnosed with Dravet’s Syndrome - a catastrophic form of epilepsy, as well as Autism.

Now nine years old, Jasmin is taking four seizure medications a day with seizures still apparent and has sustained many injuries resulting from them. Due to this she needs 24 hour care and has been sleeping with her mum since she was three months old. She is a sprightful young girl but is limited with her activates as she cannot regulate her own boy temperature.

The Jasmin Green Foundation along with their generous sponsors are putting together an event in October in aid to raise money to buy Jasmin a seizure response dog through Smart Pups. A Smart Pup will help Jasmin as she grows to aid her in developing her independence and alert others in the response to an oncoming seizure.

Mocka happily donated one of their teepees and a balance bike for the raffle that will be drawn later this year. If you would like to support Jasmin or want to know more about the cause, Smart Pups or the upcoming events go to www.jasmingreen.com. 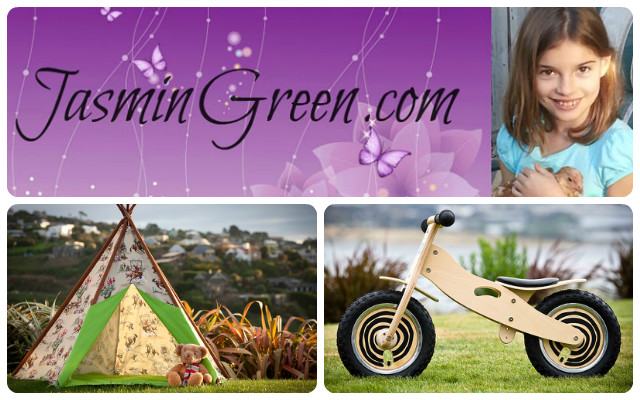